After being dismissed from the R.M.S.S Avoca, Martin procured a large open vessel and with his father-in law set sail for Port Albert from Williamstown. On arrival at Port Albert he purchased a small amount of supplies, including a bottle of brandy and set sail for Stockyard Creek. However, the weather turned bad and he was blown out to sea and around Wilsons Promontory.

After suffering great hardships, Wiberg managed to reach Cape Woolamai, and coming through the Eastern Pass of Western Port Bay, landed at Griffiths' Point (San Remo) in an exhausted condition. Wiberg travelled from Griffiths' Point to the Tarwin River ( West Tarwin Branch, where he proceeded to build a wattle and daub home for his wife and daughter on land that he had previously selected. 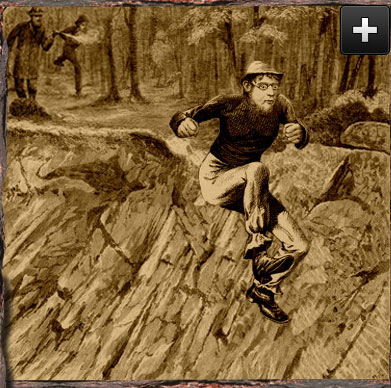 By order of Her Majesty

FOR THE ARREST OF

Suspected in connection to the robbery of 5,000 sovereigns from the R.M.S.S Avoca.

According to the Bendigo Herald,1878,Wiberg selected two parcels of land up the Tarwin River. One consisting of 100 acres, the other of 20 acres; both close to each-other.

It was here that he constructed a home made from native twigs, likely ti-tree which populate the area. The Bendigo Advertiser (1878) referred to the hut as being tolerably comfortable.

The image above, courtesy of the State Library of Victoria is that of a hut constructed of Wattle & Daub.

Daub is the “glue” that holds the wattle together, and typically consists of mud, or manure.

POLICE ON THE HUNT

Upon receiving a clue to the person who stole the gold sovereigns, Inspector Secretan, accompanied by Detective Mackay and Senior-constables O'Meara and Taylor, started from Melbourne en route for the Tarwin River, dressed as selectors, with a warrant for Martin Wiberg’s arrest.

As they were crossing the Powlet River bridge on the 20th October, 1878, by chance, Martin Wiberg approached them on horseback.

With the officers pretending to enquire about the availability of land for selection at Tarwin, Martin Wiberg dismounted his horse to talk with them. Martin stated that he had land there, and would be happy to show them around when he got back from Melbourne. In the meantime they should head to Tarwin Jack’s (John Wydell) hut as his selection was next door, and Jack would be able to show them the area. The officers then asked who they should ask for, and Martin replied, Martin Wiberg. With that, Detective Mackay and Senior-constable O'Meara grabbed Wiberg and placed him under arrest for the theft of 5,000 Gold Sovereigns from the R.M.S.S Avoca.

Wiberg who naturally looked astonished, did not deny the charge, and upon being searched, 40 wreath minted sovereigns were found to be in his possession. He was at once conveyed in custody to the Griffiths' Point police station, and from thence was brought on to Melbourne.

While at Melbourne Gaol, Inspector Secretan visited Wiberg who advised him that he would tell him where the rest of the coins were. He advised that he had hidden 2,300 inside a kettle that was on the Tarwin River.

Taking this information into account Inspector Secretan, Detective Mahoney, and Duncan took Wiberg to the Tarwin to search for the kettle.

Two days they searched with no luck, then on the third day (20th December, 1878 early in the morning they left Tarwin Jack’s hut to search as it was low-tide. When Mahoney was not looking Wiberg punched Mahoney in the stomach and ran off. Mahoney who had the title as being the fastest runner in the colony could not catch Wiberg and his pistol was faulty so would not fire.

Wiberg escaped from the officers at 4am that morning and without any coins and now without Wiberg, the officers had to go back to Melbourne - empty handed and outwitted by Wiberg. 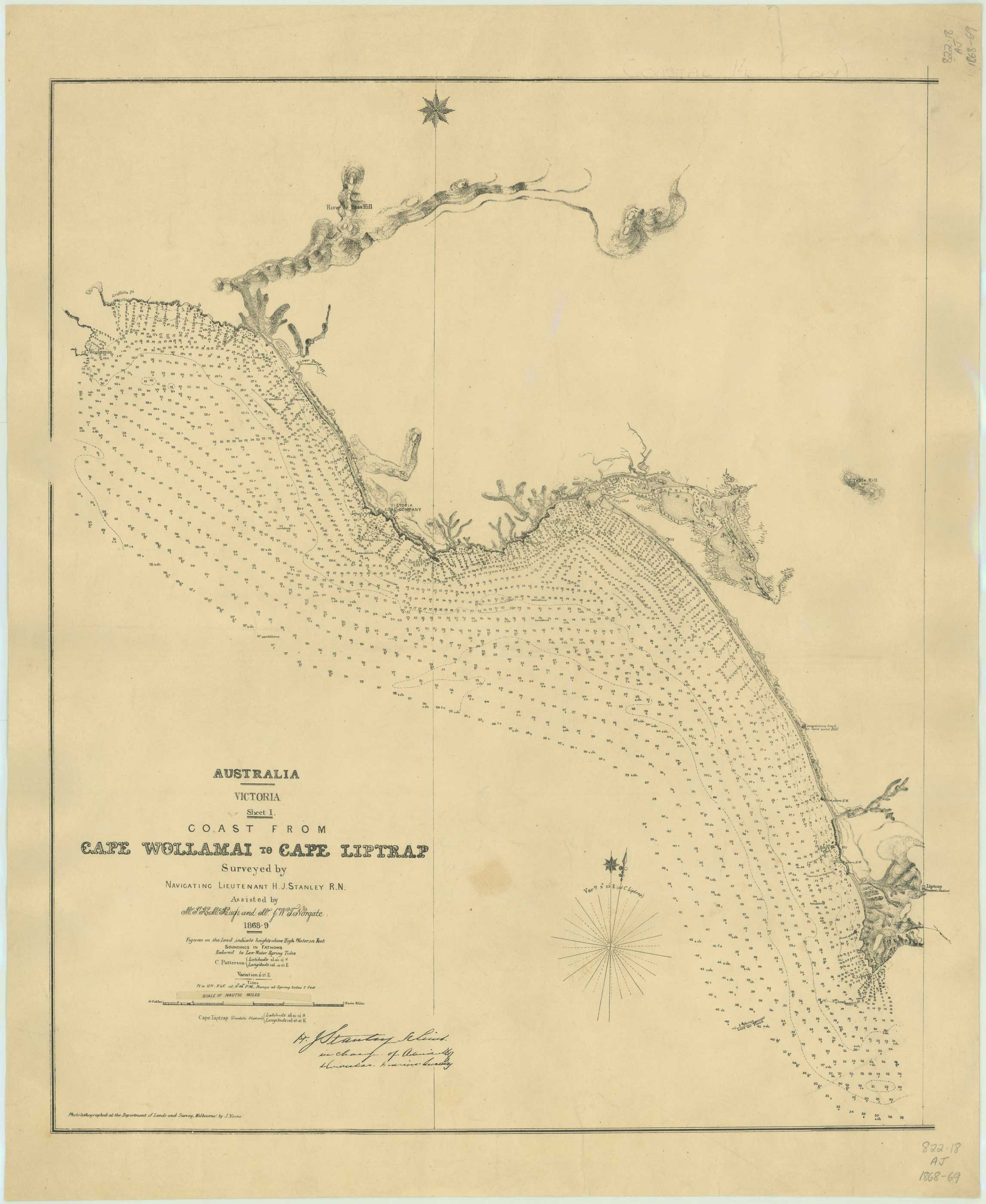 On Friday, 16th May 1879 Detective Edelston and Mounted-Constable Taylor after sixteen days searching in the wilderness came across footprints in the sand near Eagles Nest. Believing that they were onto Wiberg, they hid in the shrubs and waited for someone to appear. At approximately 4pm that afternoon Wiberg appeared, unsuspecting of the waiting officers. His eye caught Taylor crouched down, and off Wiberg bolted. Wiberg ran along the shore line and jumped fourteen feet from the cliff onto the sand below. Edelston and Taylor were aware that Wiberg was a strong swimmer who frequently swam across Anderson's Inlet, therefore with working revolvers they fired three shots, one narrowly missing Wibergs head. With that, Wiberg stopped running and put his hands up declaring "I give up", and he was duly arrested.

During Wiberg's period of escape he had used the nearby caves of Eagles Nest, that were only accessible at low-tide to hide-out.

In the sea side hamlet of Walkerville exists the cave that Wiberg used to hide from authorities. The cave is only accessible at low-tide, but can be accessed by "walking south along the beach, (or along the bush track) North to South, beyond Birds Rock, and beyond the rock pools"
(Walkerville Foreshore Committee 2009)

...and Sovereigns were found there
by Detectives, what did they miss?

The Police Board Inquiry

Dereliction of Duty in the escape of Wiberg

The escape of Martin Wiberg from three constables received significant media attention, and led to a police board inquiry who found:

"The discipline of the force appears to be loose, and the individual duties undefined—one officer giving it as his opinion that the men when instructed to arm themselves should be trusted to do it without further examination or inspection by the officer in charge, another officer saying that the arms should be examined when in the hands of the men. Further, there appears to be a want of understanding between the Police department and the Detective department, as in the case referred to Detective Mahoney borrowed a pistol from a brother officer (his private property) when he could have one from the Police department by applying for it.

There is also a want of physical training. One detective gave as a reason why he did not prevent a prisoner striking him that 'he was not a boxer,' and, although regarded as the fastest runner in the colony, when he allowed the prisoner to outrun him, he gave as an excuse he 'had not run for six years.' It also appears that the detectives are not trained, or expected to be expert, in the use of firearms.

It is very clear from the evidence that Wiberg should not, under the circumstances, have escaped; and blame is so palpable that the Police department should have without delay taken the responsibility of dealing with it without waiting for the appointment of a board, and throwing upon it the onus of a disagreeable duty. The discipline of the force, the individual duties of officers, and the physical training of the men all call for the immediate attention of the Government, if the work of the department is to be done efficiently.

They consider that Detective Secretan failed in his duty, and neglected to exercise such prudent detective-like vigilance as would have prevented the escape of Wiberg. Regarding Detective Duncan, this officer, they are of opinion, was guilty of a gross dereliction of duty when he left Mahoney alone with the prisoner. The evidence proves that he did so of his own free will, without any instructions from his superior officer. Detective Mahoney's conduct throughout proves, from some cause or other, he was simply incapacitated for such an important duty as that of taking charge of a prisoner like Wiberg

After a careful consideration, therefore, of the whole of the circumstances as brought out in the evidence, they are satisfied that the prisoner's escape can only be accounted for on one or other of two grounds; either his escape was connived at by the officers employed or they were so completely hood-winked by the prisoner, as to his character and intentions, that they were entirely thrown off their guard."

What would you do if you unearthed thousands of gold sovereigns?
Many believe that the Avoca gold sovereigns remain hidden throughout Gippsland, Victoria